In high-purity form aluminum non-ferrous metal is soft and ductile. Most commercial uses, however, require greater strength than pure aluminum affords. This is achieved by the addition of other elements to produce various alloys, which singly or in combination impart strength to the metal. Further strengthening is possible by means which classify the alloys roughly into two categories, non-heat-treatable and heat- treatable.

The initial strength of alloys in this group depends upon the hardening effect of elements such as manganese, silicon, iron and magnesium, singly or in various combinations. The non-heat-treatable alloys are usually designated, therefore, in the 1000, 3000, 4000, or 5000 series. Since these alloys are work-hardenable, further strengthening is made possible by various degrees of cold working, denoted by the “H” series of tempers. Alloys containing appreciable amounts of magnesium when supplied in strain-hardened tempers are usually given a final elevated- temperature treatment called stabilizing to insure stability of properties.

The initial strength of alloys in this group is enhanced by the addition of alloying elements such as copper, magnesium, zinc, and silicon. Since these elements singly or in various combinations show increasing solid solubility in aluminum with increasing temperature, it is possible to subject them to thermal treatments which will impart pronounced strengthening.

The first step, called heat treatment or solution heat treatment, is an elevated-temperature process designed to put the soluble element or elements in solid solution. This is followed by rapid quenching, usually in water, which momentarily “freezes” the structure and for a short time renders the alloy very workable. It is at this stage that some fabricators retain this more workable structure by storing the alloys at below freezing temperatures until they are ready to form them. At room or elevated temperatures the alloys are not stable after quenching, however, and precipitation of the constituents from the super-saturated solution begins. After a period of several days at room temperature, termed aging or room-temperature precipitation, the alloy is considerably stronger. Many alloys approach a stable condition at room temperature, but some alloys, particularly those containing magnesium and silicon or magnesium and zinc, continue to age-harden for long periods of time at room temperature.

1000 Series—Aluminum of 99 percent or higher purity has many applications, especially in the electrical and chemical fields. These alloys are characterized by excellent corrosion resistance, high thermal and electrical conductivity, low mechanical properties and excellent workability. Moderate increases in strength may be obtained by strain-hardening. Iron and silicon are the major impurities.

2000 Series—Copper is the principal alloying element in this group. These alloys require solution heat-treatment to obtain optimum properties; in the heat treated condition mechanical properties are similar to, and sometimes exceed, those of mild steel. In some instances artificial aging is employed to further increase the mechanical properties. This treatment materially increases yield strength, with attendant loss in elongation; its effect on tensile (ultimate) strength is not as great. The alloys in the 2000 series do not have as good corrosion resistance as most other aluminum alloys and under certain conditions they may be subject to intergranular corrosion. Therefore, these alloys in the form of sheet are usually clad with a high- purity alloy or a magnesium-silicon alloy of the 6000 series which provides galvanic protection to the core material and thus greatly increases resistance to corrosion. Alloy 2024 is perhaps the best known and most widely used aircraft alloy.

3000 Series—Manganese is the major alloying element of alloys in this group, which are generally non-heat-treatable. Because only a limited percentage of manganese, up to about 1.5 percent, can be effectively added to aluminum, it is used as a major element in only a few instances. One of these, however, is the popular 3003, which is widely used as a general-purpose alloy for moderate-strength applications requiring good workability.

5000 series—Magnesium is one of the most effective and widely used alloying elements for aluminum. When it is used as the major alloying element or with manganese, the result is a moderate to high strength non-heat-treatable alloy. Magnesium is considerably more effective than manganese as a hardener, about 0.8 percent magnesium being equal to 1.25 percent manganese, and it can be added in considerably higher quantities. Alloys in this series possess good welding characteristics and good resistance to corrosion in marine atmosphere. However, certain limitations should be placed on the amount of cold work and the safe operating temperatures permissibly for the higher magnesium content alloys (over about 3 1/2 percent for operating temperatures above about 150 F (66 C) to avoid susceptibility to stress corrosion.

6000 Series—Alloys in this group contain silicon and magnesium in approximate proportions to form magnesium silicide, thus making them heat-treatable. Major alloy in this series is 6061, one of the most versatile of the heat-treatable alloys. Though less strong than most of the 2000 or 7000 alloys, the magnesium-silicon (or magnesium-silicide) alloys possess good formability and corrosion resistance, with medium strength. Alloys in this heat-treatable group may be formed in the T4 temper (solution heat-treated but not artificially aged) and then reach full T6 properties by artificial aging.

To learn more about the products that we normally stock, download the product catalog or for fast service and competitive prices,  Contact us to get a free estimate at the location nearest you.

Contact your Harbor Steel sales representative to login and use our web based quoting portal. 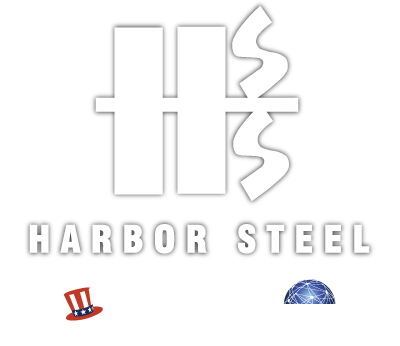